History:
The Perusini vineyards are one of the 50 happy few listed by Luigi Veronelli in “I vignaioli storici” (The Italian Wine-growers Bible). For centuries, the hills of Gramogliano have been renowned, like Rosazzo and Rocca Bernarda, not just for their natural beauty, but also for the terrain, position and microclimate that make up the cru hors classe of Friuli’s Colli Orientali.

In the eighteenth century, when French wine varieties were all the fashion, it was thanks to the Perusini family that a number of traditional Friulian varietals were preserved. One of these was the Picolit, which was revived in the nineteenth century by Giacomo Perusini (grandfather of the present owner) who was responsible for its selection and planting in the Colli Orientali (Eastern Hills) area of Friuli, following in the footsteps of the pioneering work carried out in the eighteenth century by Count Fabio Asquini.

The vineyards and the grapes:
The Perusini vineyard produces wine only from its own grapes, grown on hillsides terraces planted in Eocene loam (known as ponca in Friulan). All the vines have been closely planted in accordance with strict criteria, using either the guyot or the doppio capovolto techniques, whose productivity is low. But as Giampaolo Perusini, the father of the present owner, firmly believed, great wines start on the vine.

The Scrupulous care lavished on the vines continues with the harvesting of the grapes by hand, then in the various stages of production in the winery. The passion that epitomized the Perusini vineyard in the past still inspires a young team consisting of Teresa Perusini, her husband Giacomo de Pace, the "Preparatori d'eva" team in the field and the "Terra e Vino" people in the cellars; their labour combine respect for tradition and nature with research (the estate follows the EU norm for the reduction of pesticides and collaborates with research institutes in Italy and abroad). 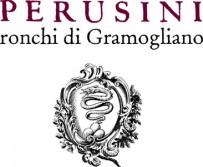 Delicate and light with the marked aroma of this grape with accords harmoniously and fully with the taste which is characteristic of all white wines of Perusini Estate, on account of their placement on the hills which imposes rigorous growing conditions. Best as an aperitive with hors d’Oevres, or to accompany an unsophisticated first course. It should be served at 10-12°C.

Colour: A brilliant straw yellow.
Nose: Their wine is perhaps more reminiscent of the Alsace style of Pinot Gris than it is to the greener, lighter Italian style. Its perfume is distinctly tropical, with a pronounced banana and passion fruit quality.
Palate: Full bodied, with a fragrant tropical fruitiness. With its pronounced acid structure it cleanses the palate, and has a long enduring finish. It has great balance and is the most viscous of their white wines, though it avoids any cloyingness thanks to its high acidity.

With the characteristic aroma of this grape, fresh and full of taste, well structured, this is a wine of great personality, lending itself to shellfish, grilled fish and first course.

Colour: A brilliant pale lemon yellow.
Nose: A typically Sauvignon character, both intense and aromatic with the green perfume of elderflower and gooseberry, which later develop into the warmer scent of honeysuckle blossom
Palate: Warm and round with fine fruit flavours, it has a mellow lightness concealing a firm acid frame. It has a pronounced finish of the saline minerals typical of the white wines form the hills of Gramogliano.

This 100% Chardonnay wine combines luscious flavors reminiscent of green apples, lemons, and pineapple and has a long, refreshing finish.

This very old locally developed wine, recognised since 1300 is one of the best wines of Friui, especially if produced at Rosazzo, it has always been the estate’s Standard Bearer. Perusini’s Ribolla, is in fact, the result of a long labour in clonal selection which has raised beyond measure the characteristic of this wine. Its subtle and elegant aroma, and its marked freshness of taste make it deal as an aperitive or to be drunk with fish.

Colour: A brilliant pale lemon yellow.
Nose: A markedly savoury scent of steely minerality complemented by an elegant floral parfume of white blossom.
Palate: Unusually complex for Ribolla it is elegant and cleasing, with a long finish of saline mineral notes. It is the most expressive vehicle of the terroir here.

This is an important and structured wine, with a distinctive and characteristic aroma, and full generous body. It is matured in barrels of french oak for 8 to 9 months. The wine is at his best after 2 to 3 years of ageing. Enjoy with prime meats, grills or game.

Colour: Deep red.
Nose: A fruity aroma of blackberry and black cherry with the hint of black pepper and a velvety, leathery background.
Palate: A full bodied wine with a good acid structure, the characteristic flavours of black fruit with a long, lingering finish.

This is an important and structured wine, with a distinctive an characteristic aroma, and full generous body. It is matured in barrels of french oak for 8 to 9 months. The wine is at his best after 2 to 3 years of agening. Enjoy with prime meats, grills or game.

Colour: Deep purple with a violet rim.
Nose: A complex herbaceous aroma of eucalyptus, with spicy black pepper, and a developing animal character.
Palate: Full bodied, with an elegant black fruit quality. The acid and tannins are well structured and give the wine a peppery but rounded taste.

A classic French wine with a fragrant bouquet with overtones of blackberries and raspberries. Ideal accompaniment for meat, both red and white, cured ham and sausage, and with spaghetti dishes with red sauces.

This wine is the result of a careful personal selection from an ancient clone of Merlot, and for years have been the Standard Bearer of the red wines. At his first presentation it won two emblems (3 glasses) in the Gambero Rosso “Guide To The Wines of Italy”. Spicy with tones of chocolate and red fruits, it is soft on the tongue and has a lingering taste with hints of toasting given off by its tasting in 5hl. Barrel of french oak. Ideal accompaniment to meat and cheese.

Colour: Medium bright ruby.
Nose: A bright aroma of wild forest berries.
Palate: Full bodied, with a fruity character that combines the sweetness and acidity of wild berries. It has good intensity and balance.

An intense red colour, a characteristic and pleasant fragrance with notes of cherry and blackberries together with flowery sensations of violet. It has a full flavour with a pleasant harmonious background. Intensives Rot.

Colour: Bright ruby.
Nose: A fresh aroma of red cherries, plums and almonds.
Palate: Medium to full bodied, with simple fruity flavours and a prominent acidity, typical of this varietal.

First produced in 1962 as the result of a bet made by Giampaolo Perusini who even then believed in the potential of the red wines of Friuli, this wine immediately won a gold medal at the Wine exhibition of Corno di Rosazzo. It is presented again today, the same blend of Merlot and Cabernet Sauvignon confined in barrels of french oak, with the same label figuring the coachman by Vernet chosen by Giampaolo Perusini – a great lover of horses – in 1962.

A noble ancient vine of Friuli. It has been defined as “the wine of meditation” by Veronelli, who has linked its rediscovery with no shadow of doubt to three generations of the Perusini Family. They were the first to select and the cultivate Picolit on the Colli Orientali, and then to make it known outside of Friuli. It is a wine that can be drunk by itself, at the end of the meal, or, like a Sauternes, with pate or a strong cheese. Partly allowed to dry on the vines, and partly harvested very late, the Picolit of Perusini, matured in barriques of oak an acacia, has the characteristic elegant aroma of acacia flower and honey. It should be served at 14-16°C.

Pure Passion International aspires to be the epitome of a "15 years old vine" in the wine and food business that's graced with the age of knowledge over the years, yields fruits which bear the richness in flavors and capability to plant new "vines" into local soil though conditions may be challenging! Over time and patience, Pure Passion International delivers to its loyal customers as YOU come First always!